The Bach Cantatas - About the Author

Julian Mincham was born in the outback of Australia. He took degrees in music, English literature and philosophy at Adelaide University where he enjoyed himself so much that he determined to return in later life ‘on the other side of the lecture podium’.

He began as an accompanist and secondary school teacher before moving to Britain where he became involved in teacher training and music lecturing. He ended his institutional career as Chair of Music at a large London University, leaving it to spend more time on his major Bach project.

He is married to Cordelia Bryan, a Higher Education consultant and has two adult children Melanie and Laurence. His main non musical interests are flying (for many years he held a British private pilot’s licence) reading, theatre, gardening, travelling and corresponding with people all over the world.

He is an accomplished pianist and has researched the music played for the films of the pre-talkie ‘silent ‘era. He has performed for schools, universities and film clubs introducing movies by Buster Keaton, Laurel and Hardy, Charlie Chaplin and Harold Lloyd, presenting them with improvised piano accompaniments.

The study of Bach and his music, however, is a continuing preoccupation. One source of greatest human happiness, he believes, is the listening to and/or playing of some Bach every day. His particular  interest in the cantatas began in the mid 1990s and the idea for the current project took shape a decade later. He hopes that these essays may draw more people into what he believes to be one of Western civilisation's greatest, and perhaps least fully understood, music canons. 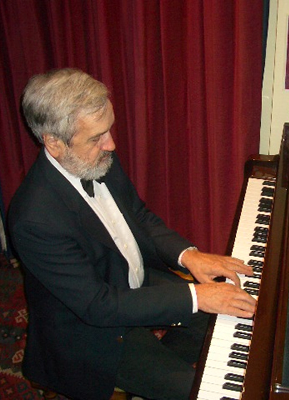