Sandwiched between the muscular, fluid rhythms of the chorale/fantasia of C 5 and the harsh, almost alien landscape from C 38, this opening movement comes as something of a surprise. It has a gentle, pastoral quality of great delicacy and refinement that contrasts strongly with the works surrounding it. Charm, grace and a suggestion of fragility are all communicated through delicate orchestration within the context of the pastoral 12/8 time signature.

This, like the similarly restrained chorale fantasia of C 8, leaves the listener feeling that s/he has never come across another piece of music quite like it. Both explore, with incredible subtlety, the tender nature that restrained and imaginative use of major keys can communicate.

Traces of the darker emotions do yet occur; they have not been completely abandoned but here they colour delicately, rather than assail, the emotions.

This is the seventh fantasia set in a major key and the third to use F, the others being C 20 which opens this important cycle and C 96. C 1, which ends the run of forty consecutive chorale cantatas, is also in this gentle key. C 20 is a gigantic French Overture expounding themes of eternity, terror and confusion. C 1 is a superb tone poem praising the Lord through the metaphor of the morning star. C 180 is, perhaps, closest in character to C 96, a lyrical pastorale, a private inducement completely devoid of presumption or posturing, tenderly tempting the soul to leave its caverns of sin and emerge into the radiance of the Lord. All four fantasias are contrasting in character but share an elusive personal connection.

Thus the mood of the fantasia of C 180 is gently provocative, suggestive of a beautiful butterfly emerging from its chrysalis into the light of day. It may well be that the clamouring hordes still remain, wallowing in sin and rejecting redemption, but here they are relegated to the background. This is a Divine invitation to the individual and the sentiment is entirely personal.

The text calls upon the soul to leave the caverns of transgression and emerge into the Light of the Lord′s salvation. The underlying analogy is that of the bride preparing for her wedding and, presumably, of leaving one life in order to begin  another. However, the connections between ‘bride’ and ‘soul’ are implied and much more subtle than in some other cantatas e.g. C 140 (chapter 55). Comparisons may also be made of the relationships between Christ and the Soul in the dialogue cantatas (Cs 57, 32, 49, 58 and 152).

The orchestration of the ritornello is one of Bach’s most delicate as rustic recorders, oboes and strings gently pass the motives amongst themselves. But although a peaceful aura of shimmering pervades the F major harmonies, Bach is keen to give us subtle reminders of the ‘caverns of sin’ from which we hope to emerge. Shadowy minor-mode harmonies are heard just before the voices enter, the first chorale phrase ends in D minor, the second ritornello statement journeys through A minor and the second and fourth chorale phrases conclude with the lower voices writhing in minor-mode counterpoint. In C 8 Bach tinted the major mode melodically by introducing the three notes distinguishing minor from major. Here the technique is similar, tonally reinforced by the suggestions of related minor keys.

This is a most subtle manner of musical communication. The main image of emerging from darkness into a gentle but radiant light is conveyed with delicacy and restraint. Nevertheless, we are constantly brushed by the darker shadows of the misdeeds that, hopefully, we are about to leave behind us.

Although the mood is personal, Bach ensures that the message is significant for all humanity. The lower voices enter imitating each other, more closely as the movement progresses and suggestive of a semi-dormant multitude, an image reinforced by the ever-changing order of entries. On phrases 1 and 3 it is A, T and B and in phrases 2 and 4 B, T and A. Latterly Bach employs other combinations, often with the tenors leading. These are the masses of humanity gathering together in order to leave the shadows and surface into the light.

But the decision to emerge from the morass still depends upon a deliberate individual act of faith.
One technical point of composition is likely to be of greater interest to the music student than to the general listener who might be forgiven for skipping the remainder of this paragraph. The notes of the first phrase of the chorale are (omitting the passing note) a, g, f, g, a, c, b flat and a. Bach selects only the kernel notes from which to construct the flute’s first phrase of the ritornello: a, f, c, b flat and a.

Ritornello theme (not in real time) set above chorale melody.

Thus the two themes are bound together because they both emerge from a common shape. We may not recognize this consciously; but it leaves us with the feeling that they are irrevocably linked. In the following century Brahms used similar techniques of uniting melodies, notably in his symphonies and the St Anthony Variations.

The second movements of Bach′s cantatas are equally likely to be recitatives or arias. Here Bach clearly wishes to break the mood instantaneously and a highly extrovert aria achieves this more dramatically than a conventional recitative. Thus the serenity of the fantasia is abandoned in a trice as the flute announces the ritornello of the tenor aria with its infectious sparkling—-get up and open your heart; your Saviour knocks upon your door: This physical action is suggested by the rhythms of the very first bar.

The first movement invited sinners to emerge from their caves of sin; this one demands it. Nevertheless, the fact that it is so lightly orchestrated (flute and continuo only) is still suggestive of a focus upon the individual. There are no blazing trumpets or drums; or even oboes. The entire writing is suffused with Schweitzer’s three-note joy motive and the almost breathless expression of personal euphoria is unmistakable.

When we make the right decision, joy will be unabated; it seems that, as the text suggests, we can hardly catch our breaths in order to speak. But speak to Jesus we must, and the long note and melisma on sagen—speak—-(bars 75-79) emphasizes this message.

The first of three recitative movements shows us Bach still experimenting with the recitative/chorale hybrid and finding new ways of presenting it. With the accent still upon the individual, Bach avoids the chorale blocks such as are to be found in C 101. Here he begins with a section of recitative which acts, in effect, as an introduction to the chorale. The reason for this is to separate general narrative (intoned recitative which extols the great gift of communion) from the personal proclamation of the repentant sinner—- oh how I thirst and hunger for this great gift.

Thus does Bach draw a clear line between the expression of principle on the one hand and the pleas of the individual on the other. Furthermore, Bach manipulates both his musical textures and structures so as to perpetuate the human focus of the first two movements.

The chorale is sung in full by a soprano but embroidered in such a way as to disguise its essential bareness. Sometimes it almost sounds like a new melody but then, that is the point. This is a tender expression of the individual’s yearning for the comforts that must result from a union with God. Thus Bach has re-wrought the communion hymn so that, although it remains the basis of a universal longing, it has now become personalized. The continuous semi-quaver counter-melody from the piccolo cello envelops the soprano’s voice in a quasi womb-like blanketing of divine reassurance.

Cello above voice and continuo. 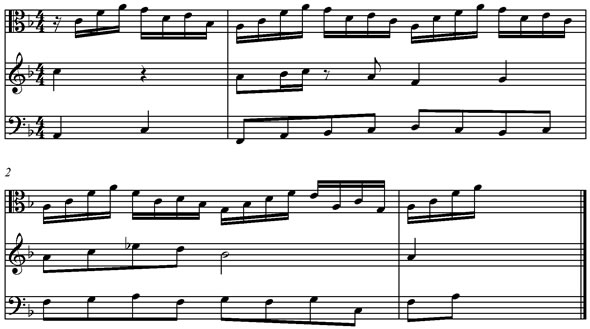 One further technical point to notice is the alternation of two and three-bar phrases of this particular hymn, a feature which is certain to have attracted Bach’s interest and which he retains throughout this movement.

With his vast performing experience, Bach would certainly have been sensitive to the fact that for many congregation members, long recitatives are likely to hold the listener′s attention rather less than arias or choruses. Consequently, he seldom places them consecutively in the cantatas. Here, presumably, his justification is that much of the previous soprano movement with its busy obbligato semi-quavers (no 3) feels like an aria.

This alto recitative, again with the accent upon the personal, espouses the mixture of joy and fear that we may experience when looking upon God’s greatness and His mysteries. The melisma on the words Freude—-joy—-is obvious almost to the point of banality. Bach does not always go out of his way to paint a single image so blatantly at this stage of his career, preferring to concentrate upon the wider picture. This recitative still retains a certain delicate quality, however, from the recorders’ chordal accompaniment. Compare this with a similar use of the same instruments in the recitative which opens C 175 (chapter 47).

The soprano has already contributed a recitative and chorale but now comes his/her aria. This is the point of the work at which we often find Bach changing direction. A substantially major-mode work may suddenly find a trenchant minor key employed at this point—and vice versa. But not here. This cantata is, despite the minor-mode colourings of the first movement, a relentlessly optimistic work, exploiting major keys to the full. Every one of the seven movements begins and ends in the major, even the three recitatives, a most unusual event. And this soprano aria is as joyously ebullient, in its own way, as was the earlier one for tenor—-Lord, You are my sun and light—-You are all things to me and You will note my fidelity! There seems to be no room for a disparate viewpoint now; once the sinner has emerged from the sinful grottos there can only be rejoicing. Faith and loyalty, triumph and eternal harmony are all assured and any thoughts of the subterranean caverns of sin have been left far behind.

The middle segment of this da capo aria touches, as is traditional, upon related minor keys, but only for a moment. It is rather short, less than half that of the outer sections. There is, of course, as the last line of text reminds us, always the possibility of vacillation and weakness. But by now we know and are assured, indeed, at some considerable length, that ultimately our steadfastness of faith will not waver. The melisma on alles—-everything (in the context that God means everything to the redeemed sinner) momentarily underlines this point (bars 31-33).

The final recitative adds little to the overall work and one wonders why Bach retained it. Possibly his committee-vetted texts, agreed some weeks before the works were to be performed, could not be radically altered by the time Bach was into his full flow of composition. This is a plea for the Lord to both love us and to generate within us a reciprocal affection.

The tender melodic melisma on gedenke—-a remembrance or recollection of the Lord’s devotion—-again marks Bach out as the consummate professional, noticing every significant detail. The text may add little to the theme but yet he invests it with a moment of truly poignant emotion.

The communion chorale, composed by Johann Franck, seems not to have been used often by Bach despite its interesting phrase structures. It closes the cantata on a metaphor—-Jesus, the bread of life, I hope it will not be in vain that You invite me as Your guest in heaven. It is very simply harmonised, touching lightly only upon C major and avoiding chromatic colouring. The cantata ends, as it began, by espousing the personal relationships that we seek to forge with God.

Bach’s harmonization, transposed into F so as to conclude the cantata in the same key as the opening fantasia, is simple and basic but at the same time, potent and quietly confident.