Let your word protect us, Lord.

The thirty-eighth cantata of the cycle for Sexagesimae. 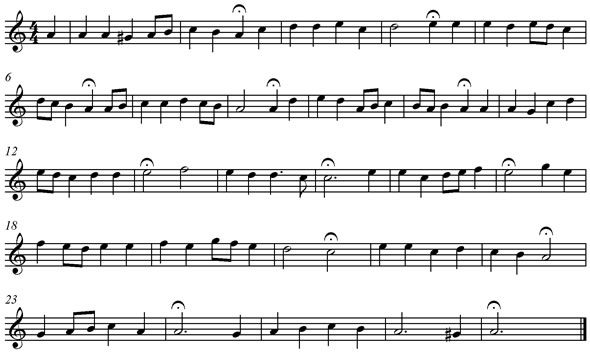 Yet another of Bach’s tempestuous A minor opening movements, on this occasion given greater impact by the addition of a solo trumpet to the strings and oboes. Bach′s practice was to use the trumpet either as an individual solo instrument or in a group of three with timpani. Rarely does he use it in groups of four and even less in pairs.

If the reader first becomes familiar with the chorale before turning his/her attention to the fantasia (a recommended procedure) s/he will encounter a surprise. Bach’s normal practice, with which we should now be quite familiar, is to take each of the chorale phrases, inserting them into an orchestral framework, frequently separated by ritornello episodes. Thus six chorale phrases would generate six choral interpolations.

So it comes as something of a surprise to find that this chorale, one of the longest with twelve phrases, generates one of the shortest fantasias with a mere four choral segments. We know that Bach usually maintains the same number of phrases and the general structure of the chorale in the fantasias, although he frequently alters rhythms and time signatures. Nowhere else have we come across an example where Bach deviates so much from the given configuration. Why does he do it?

One clue may lie in the timing of this cantata. The placing of C 125 (for the Purification of the Virgin) on February 2nd meant that C 126 would need to be performed just two days later. It is inconceivable that Bach could have composed and rehearsed this work in one day, so he must have been working on it concurrently with C 125, itself a work of considerable proportions and taking the best part of half an hour to perform. C 126 is not much more than half this length, with no greatly extended movements and a very concise fantasia.

Additionally, the busy period of Easter was only a few weeks away. Bach would be presenting the Easter Oratorio, the Saint John Passion and Cs 4 and 6 in barely a seven day period (Wolff p 277). It may well be that pressure of deadlines forced Bach to think within a shorter time scale as he had done in the run-up to the Christmas celebrations of 1723. As usual, there is no diminution of quality or inventiveness.

So to sum up: an abbreviated, four-phrase chorale is used in the fantasia (and two further movements) of C 126, and a complete version of it closes the work. In any case, the chorale melody seems to have had a chequered history; Boyd (p 158) identifies it as an unusual hybrid, Luther providing the first section upon which the cantata is predicated and Walther the remainder. Additionally, it has also been suggested that the longer and shorter versions originated from two different hymns by Luther.

The theme of this work is derived from a fervent plea for protection from our enemies, thus providing the composer with opportunities for depicting a number of striking images. The first verse calls for the Lord to sustain us and repel our enemies, but not just in a general sense; the murderous Turk and Pope are grouped together as salient examples! This is not a subject about which we can be mealy-mouthed as the immense energy of the music makes clear.

The ritornello is martial and sturdy due to the trumpet summons and the insistence of the single (A minor) chord over the first three bars. This is relatively unusual for Bach who generally likes to get his progression of harmonies under way as soon as possible. The effect is rhetorical with combined implications of the military, the mighty throne of God and a  sense of powerful entreaty.

Once the harmonic tread gets under way, trumpet and oboes, shortly to be reinforced by the violins, declaim lines of semi-quavers suggestive of the enemies swirling around us. It is amazing just how much of the text Bach manages to invoke in musical terms in only twelve bars of instrumental writing. It is a vibrant theme well worth repeating, and so it begins and ends the movement as well as separating chorale entries.

We have often seen how Bach manipulates the vocal lines of his fantasias in order to emphasise and illuminate aspects of the text; simply turn back one chapter to C 125 for clear examples. In the setting of these verses Bach is frequently as much concerned with graphic portrayal as with musical cohesion. The first line of this stanza is a call for the Lord to maintain and protect us and so, caught up with this entreaty  the lower voices  continue unabated into the second chorale phrase (beginning bar 21). By this time they have built up a good head of steam, appropriate for the anger expressed at the violating enemies (line two). The lower voices play as much part in carrying forward the momentum of the music as the instrumental ensemble; this is not a case of providing mere accompaniment!

The writing under the third phrase is direct and relatively unadorned. This is the mention of Christ, the Son whose enemies (as the last line of text informs us) wish to cast from His throne. And this final line, wrought with busy descending sequences and an aggressive semi-quaver bass, suggests both the raging of the enemies and their ultimate downfall.

The ultimate word, however, is Thron—-throne. Held on a single chord in all four vocal parts, this leaves us with a pervasive image of the might and enduring quality of the power and seat of the Lord. Technically this is possible because the first three bars of the ritornello now sounding against this chord have no change of harmony (bars 51-3). Was Bach preparing for this moment even as he formulated the very opening bars?

Bach’s attention to the smallest of musical and imagic details is equally apparent in the tenor aria. It is accompanied by two oboes and continuo, a telling combination. The stanza is really in two parts, the first a further entreaty to God to convey his strength to us, and the second (from bar 33) a plea to fill our churches with joy because of the scattering of our enemies.

Think, for a moment about the complexity of ideas suggested in this one verse: God’s power, the transmission of it to earth, the scattering of enemies, and the consequent filling of the places of worship with happiness. The artistic problems of conveying all this and still maintaining a satisfactory sense of musical structure are formidable. And to a great degree, it is in the minute detail where one finds Bach’s remarkable powers of creativity working at their most focused.

The first descending motive in the continuo is immediately taken up by the oboes (bar 1) and subsequently the tenor, thus encapsulating the sense of the opening words—-send down! At this point the texture becomes that of a quartet (voice, two oboes and continuo) powerfully interwoven and suggestive, if not overtly of God’s strength, then certainly by implication. Notice the one high note standing out of the melodic line on the word oben—-above—-(indicating heaven)—-bars 8 and 14.

But any doubts about our attitude towards Him are quickly dispelled by the phrase Herr der Herren, starker Gott—King of Kings, mighty God! Three times we hear it (from bar 17), perhaps suggestive of the Holy Trinity and each time it is repeated a tone higher. Its insistence is compelling, its message unmistakable.

The middle section of the aria (from bar 33) deals with the second part of the stanza, filling the church with joy and scattering the enemies. The oboes continue to ‘send down’ their message with insistence upon their original motive, but the singer has other ideas. This section contains two melismas of astonishing length and complexity, the first on erfreuen—-delight or joy, and the second on zerstreuen—-to scatter. It would be difficult to imagine a better musical representation, particularly of this latter action.

The first section returns but not as da capo; it is substantially rewritten. The three exclamations of God’s name are now repeated at lower pitches, possibly a symbolic suggestion of his strength as it is communicated downwards from heaven to earthly mortals.

Bach may have had to compose this cantata quickly but his eye for detail and subtlety of expression did not fail him.

The third movement is another of those with the problem of an unduly long text. As usual Bach finds a way of combining recitative and chorale so as to vary the texture and maintain the interest in both the music and the notions it expresses. It is worth noting just how many hybrid combinations he manages to arrive at in this cycle alone.

Here the alto and tenor alternate in lines of recitative but come together for the four chorale phases, the one singing them in highly embroidered versions, the other counterpointed against them. The lines of the chorale offer up a prayer that we may all become of a single mind and receive God′s support and stewardship through life and death.

The recitative sections expand, somewhat colloquially, the thoughts expressed in each of the chorale phrases. Unusually, Bach does not here accompany the hymn tune with a consistent figure in the continuo, although the bass line does become marginally more active beneath it.  It has been suggested elsewhere in these essays that his reason for providing an underpinning ritornello theme is to ensure that the congregation recognizes the chorale melody even when it has been embellished or distorted. There is no need on this occasion because the coming together of the two voices proclaims each new phrase.

The only movement of the cantata in a major key is that which follows, for  bass. The mood is aggressive, almost to the point of violence—-let us hurl into the abyss of destruction the products of pride and arrogance!—-Ward off the fury of the enemies! The continuo line encompasses the energy, anger and action of hurling downwards, which the text so vividly describes. Very fast descending scales depict these actions flamboyantly and they punctuate the movement throughout.

There is no additional obbligato instrument; this is another of these occasions when the obviously very adept cellist encompasses both roles. The words Toben—-raging—-and Verlangen—-demands—- both attract long, taxing melismas requiring great technical dexterity. The vocalist is stretched to his limits so as to convey the terrible struggle of reaching a haven of peace amidst terrible storms. In order to communicate this graphically, Bach pushes his singer to his ultimate point of technical endurance.

And who knows? Possibly late at night, with his glass of brandy and pipe at the composing desk, might not Bach have allowed himself a wry smile at the fact that, in order to convey a sense of superhuman demands, he was placing similar requirements upon his hopefully willing, and presumably able, young vocalist!

The simple secco setting of the tenor recitative holds no surprises and simply reasserts the theme of God’s protective presence watching over us. It returns us to the slightly muted minor feeling of the earlier movements but does not, somewhat surprisingly, lead us back to the key of the chorale.

In its extended form, the chorale repeats the plea for the granting of peace, but somewhat more specifically. Here is expressed a wish for good and wise governance allied to the desire that those who lead us might have the wisdom to rule well. Only in such circumstances will we be able to enjoy full and devoted lives.

Not every verse that Bach set has strong resonances for twenty-first century listeners; but this one has. Little seems to have changed over the centuries and Bach’s music, allied to the universality and continuing relevance of this theme, continues to move and unite us.

Similar echoes of a war-torn Germany and the desires for peace and good government are also to be found, and may be compared, in the closing chorale of C 42, chapter 42.