Jesus sleeps, what hope do I have?

The thirty-eighth cantata of the cycle for the fourth Sunday after Epiphany.

We come now to another cantata lacking a chorus but, as if by way of compensation, containing three stunning arias. It is constructed with perfect symmetry, aria–recit–aria–the centrally placed bass arioso–balanced by aria–recit–chorale. The fourth movement acts as a fulcrum around which the two connecting themes are balanced, firstly a life of separation from Jesus and, to conclude, life in His presence and under His protection. Furthermore, the arias on either side of the arioso are theatrical ′rage and storm′ movements, highly operatic in style and declamation. In particular, the first of these is a piece of quite hair-raising virtuosity in term of its demands upon the musicians and striking originality in terms of its construction.

The first movement is for alto, strings and continuo with recorders doubling the violin lines. The theme is simplicity itself—-Jesus sleeps; what hope have I?—-already my pale face sees the abyss of Death opening before me. Bach is much more concerned with the first of these statements; the notion of the abyss is dealt with in only a little over one fifth of the movement′s fifty-three bars.

The mood is set immediately in the key of Em, one Bach frequently associates with the crucifixion. Low dark strings have a three-note motive which forms the bulk of the later accompaniment materials and, as early as bar two, the continuo begins its series of descents into the chasm.

Strings (recorders doubling an octave higher) above the continuo line.

Strings and recorders attempt to stretch upwards (from bar 5) but to no avail. Before the alto enters they too have begun their inevitable movement towards the abyss.

The atmosphere is one of death, demise and isolation, none of which is alleviated when the voice enters on an arresting three-note motive—-Jesus sleeps. This is repeated, pausing on a low, sustained b towards the bottom of the alto register, clearly suggestive of sleep, inactivity and stagnation. The immediate and inevitable enquiry—-what will become of me?—-follows and is pointed by an upward melodic inflection and a momentary cessation of all sounds, leaving a short pause for the enormity of the situation to sink in.

Bach then turns his attention to the picturing of the abyss (another long, low note of foreboding) after which a short instrumental episode, based around the original three-note motive, is heard above the continuo′s depiction of the beating of funeral drums (bars 27-32).

The first couplet now returns to be set much as before. However there are two occasions, the only ones in the entire movement, when the supporting ensemble introduces brief semi-quaver movement (bars 35, strings and 43, recorders) in each case marking the entreaty, what of me? Is this a sign that, although unaware of it, nevertheless, we are still heard? Or are they simply the flickerings of a disillusioned and unquiet soul? Or even a brief reminder of the fires of hell itself?

The secco tenor recitative moves from the alto′s condition of inertia and acceptance to one of almost aggressive interrogation—-Lord, why are You distant? Why are You hidden? Are You not troubled by my distress? The rhetoric is marked by the leap to the f natural at the end of the first phrase, the dark and unexpected harmonies on kläglich—-wretched (bar 4) and the rhythmic sturdiness of the writing. The second half of the verse is marginally more conciliatory, reminding Him of the star He had offered as guidance to the path of righteousness, the melodic shapings now becoming more flowing.

But Bach′s librettist, more skillful than some, does not fall into the artistic trap that too early a conversion would create. The third stanza will present the journey in the most hazardous of terms and thus, for the sake of credibility, the tenor′s last line here must be—-but even so, this pathway offers nothing but danger!

And so the perils are now presented to us in the form of one of the most extrovert sturm and drang —-storm and stress—-operatic arias in the canon. The metaphor is of the raging tempest at sea and the safe haven, the first representing the seething forces battering against true faith, the second that condition of mind through which the true Christian is able to resist and overcome them, thus achieving salvation. The violins work themselves into a frenzy of tumult while the rest of the band agitates with continuous repeated notes below them. The mode is major but within his first phrase the tenor declaims two of the three notes that distinguish G major from Gm: an f natural and an e flat.

The tension is created not only through the torrents of notes but through a range of rhythmic, harmonic and textual means.

The three occasions when the true Christian reaches his haven and affects an appropriate state of firm and faithful rectitude are too obvious to need identification here. Suffice it to say that Bach differentiates them from the main body of the movement by slowing the tempo, changing from three to four time, surrounding the voice with sustained chords and moving tonally to keys on the ′flat′ or more calming side e.g. from E to D to A minors. The melismas portraying the redoubling of the raging billows in the final section are truly hair-raising.

Very little of any of Bach′s music is undemanding but from time to time he writes a part so difficult that the sheer effort of ′will I be able to get the notes out?′ is communicated directly from musicians to listeners. In this aria, even a very good tenor is stretched. The tension he feels in straining for the notes is a part of the musical depiction of effort which makes the aria such an exciting and invigorating experience for the rest of us.

Very often a keystone movement, i.e. one upon which the premise of the cantata hangs or revolves, is an aria; but not always. It could be a recitative, a chorus or, as in this case a seemingly unpretentious arioso. This movement is not even fully self-contained, the ending so contrived as to lead directly and immediately into the following aria. The bass voice takes on the role of God and the text is but a single line, a question put to mortals—-why are you of such little faith, so fearful? It isn′t much, but it is enough. One presumes that the voice of God only has to be heard; at this stage it needs say nothing that placates or calms. Simply because it is there, all will be well and the earlier doubts may fade away.

Dürr describes this movement perfectly as a two-part invention (p 217). The one bar opening theme is cast between voice and bass lines and the effect is one of strength and authority.

Furthermore, God may be seen perfectly in tune and at peace with His environment. Listeners might amuse themselves by counting how many times the opening theme is heard in the two melodic parts!

But it is in the following aria where we learn that God is to do more than simply enquire about the condition of His flock. The metaphor of the tempest continues but now the emphasis is different. While the tenor had demonstrated how the good Christian could stand, although not without difficulty, against doubt, enemies and opponents, the bass now takes the voice of God and commands the elements to be silent—-be still wind, sea and storm—-it must be that My chosen Child suffers no harm. It is an interesting and perhaps parochial observation that God thinks first of His Child and secondly of His flock but the message is, nevertheless, welcome; God is here, He commands, Jesus is safe and will continue to support and protect us despite earlier doubts.

The oboes join the strings and together they form a representation of the raging seas quite different from that in the tenor aria. The surging, restless movement is still noticeable, but this is a less unabandoned, more controlled tumult, suggesting from the beginning that God′s commands are having some effect! The initial oboe theme, with its two rising notes, pre-empts God′s decrees and, when later followed by the falling octave it creates a truly commanding musical motive (bars 10 and 13). 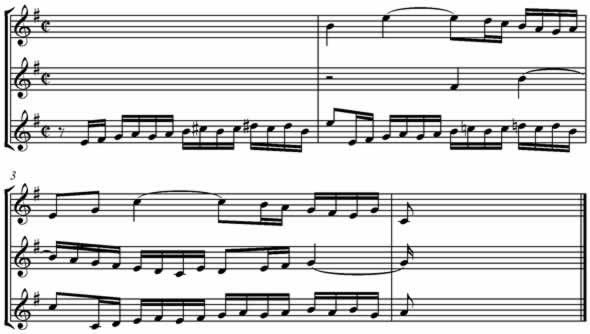 Furthermore, the similarities in shape of the motives on which the bass enters in this and the fourth movement should not go unnoticed (see also later comments in this essay on C 87, vol 2 chapter 44).

The first and third sections of this da capo aria deal with God′s directives and exemplify His authority. The middle section (from bar 51), in which the raging torrents have not yet fully abated, reminds us of the boundaries of nature and the need for His Son′s protection. A typical Bachian touch which may easily go unnoticed is the brief oboe canon of a falling chromatic scale (bars 70-72). This is an allusion to the cross and the crucifixion such as may also be found in the Crucifixus movement from the Bm Mass and C 4 (vol 2, chapter 42).

However, God′s words—-[Jesus] should suffer no harm—-are set to a rising chromatic scale indicative of His faith in His Son′s ability to fulfill His destiny.

The alto recitative is very short and simply confirms—-I am happy now Jesus has spoken and He speaks—-mighty waves, sorrows and misfortunes must now end. It is a simple and honest declaration of faith.

This chorale seems to have been liked by Bach who had used it to close C 64 during the 1723 Christmas celebrations as well as later recalling it for C 87 from the second cycle (vol 2, chapter 44). It is also used as the basis of the motet Jesu, meine Freude. Some observations about the different cantata settings may be of interest.

Bach could have taken the harmonisation from C 64 and used it in C 81 without change; they were in the same key of Em which, in each case, accords with those of the opening movements and the overall tonal strategy. But he reharmonised it for the later work, maintaining the same cadence structure but substantially altering the bass line. It is not absolutely clear why he did this. It might have been partially a practical or pedagogical matter or a way of keeping the choir on their toes; they could never assume that because they were repeating a chorale, their parts would be unaltered. They had to be well trained in order to read the notes accurately at sight.

But it is more likely to have been an issue of text. The verse closing C 64 is a peaceful farewell to the pleasures of earthly existence and its sinful ways, an acceptance of death and a looking forward to the inheritance of heaven. That for C 81 is more pro-actively assertive—-under your protection I am free from assaults—-let Satan rage, lightening crack and thoughts of sin and hell strike terror in our hearts—-Jesus will still protect me. It is possible that Bach sought a presentation of more force and confidence with which to conclude this work.

The version which closes C 87 is in the lower key of Dm, that of the opening movement, a fact that demonstrates that Bach′s transpositions of chorales was often to accord with a cantata′s overall tonal plan. Interestingly, we hear in the first movement of that work the voice of God set to a motive similar in shape and identical in rhythm to the opening vocal phrase of C 81/5. Did Bach, when composing C 87 turn his mind back to the earlier cantata which had incorporated the same chorale?

Finally, it is worth recalling that the opening notes of this chorale, as set in the key of Dm, spell out the order of the keys of the six English suites: a, a, g, f, e, d. A coincidence perhaps? Or an abstruse tribute from an immensely complex and intricate mind?