Dürr dates this as one of Bach′s last religious cantatas, presented possibly as late as 1746/7 although he makes clear that much of it was based upon a wedding cantata originating from the early Leipzig years (p 356). It is the fourth extant work for this day, the others being Cs 172, 59 and 74 (vol 1, chapters 57 and 58, vol 2 chapter 48). Of these works, few would dispute that the most mature and memorable of the quartet is C 34 despite its rather odd final chorus and the omission of a chorale.

C 172 was an early Weimar composition reused as a part of the first cycle; perhaps its most appealing movement is the tenor aria with its sinewy string obbligato line. C 59 also appeared in 1724 although it is possible that it may have been composed some years earlier. Two of its movements were subsequently used as the basis of C 74 a year later, one of them substantially improved although that cantata still turns out to be one of the least prepossessing of the second cycle works.

C 34 boasts an opening chorus of exceptional charm and invention after which it maintains its attractiveness throughout.

There is little doubt that the main image which stimulated Bach′s imagination was that of the heavenly flames pictured in the first stanza—-Eternal flame, fount of Love, enkindle our hearts—-we wish, Lord, to be Your temple and for our faithful souls to please You.

Two images are immediately obvious from the opening bar of the vigorous and ebullient ritornello theme. The first is the trumpet′s sustained note, itself to become a feature of subsequent choral entries. It represents the solidarity and constancy of Divine Love, with possible additional intimations of God′s Temple. The second is the busy semiquaver string melody which suggests the divine conflagration. It continues, on the first violins, throughout what transpires to be a long and closely developed movement, the players′ fingers given rest only occasionally when the activity is taken over by other instruments or voices.

But incessant though this continual motion might be, it is clear that this is not the conflagration of the flames of the underworld; this is a representation of the pure flames of divine love, and that is a very different matter. The chorus is essentially a celebration of the Holy Spirit making its domain within the heart of the faithful Christian, and that is something to celebrate. Two oboes, drums and three trumpets join in the merriment, flickering away as appropriate.

The energy and joviality of the opening ritornello is such that we are almost deceived into thinking that it might be another of those commanding sinfonias which Bach presented with increasing frequency after the second cycle; but this is not to be. In fact, it turns out to be slightly disappointing that we only hear it in full at the beginning and end, not the four times which often mark traditional da capo structures. Nevertheless, the length and unabated drive of this busy theme is such that it will leave most listeners invigorated. The sheer fertility of Bach′s imagination and his ability to sustain interest through the skilful reordering and development of individual musical elements is apparent throughout.

A particularly attractive example of the process may be found in the section from bar 15. Here the two oboes imitate each other with the simplest of motives, making much of the sustained note idea, now emerging as a series of suspensions. Against this is a simple but rhythmically enlivening idea thrown about between 2nd violin/violas and continuo. Running through it all is the continuous image of divine flames, the endlessly invigorating semi-quaver thread played by the first violins. A close study of this passage will also illuminate much of the ensuing writing for the choir for which it provides the basis. 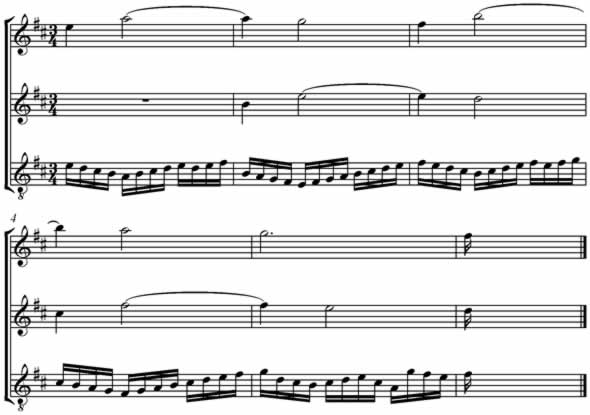 Indeed, each of the first three choral entries makes use of the idea of eternal Divine Love shining through the ongoing flames of consecration. In the first entry (from bar 26-7) basses sustain a long note, the sopranos following suit (bar 35) and then the altos (bar 47). Similar textures may be found with more transparent textures from bars 65 and 70 and much of the writing from bar 75 to the end of the section will be found to be a development of those bars described above. Throughout it all runs the first violin′s sustained representation of the continuous fire.

The first four bars of the middle section give a brief moment of respite from the violin flames, although the text does not allow us to forget them. They return in the fifth bar, however, apparently rejuvenated by the short break and traverse the contrasting minor keys through which Bach leads us. A feature of the choral writing is the entry of voices in pairs (from bars 109 and 116) and the powerful crotchet-led wish to please the Lord (from bar 124).

The joyousness of the A section reprise is heralded by the immediate and welcome return of the festive ritornello theme.

There are two recitatives, the first for tenor and the second for bass. They are of a similar mood and temperament, simple, sincere and authoritative. Both begin over a short pedal bass note which establishes an air of certainty and conviction. Both are in minor modes, the first wholly so but the second veering, at the end, into the triumphant key of D major, that of both choruses.

The tenor addresses God directly—-Lord, our hearts sustain Your Word so let them be Thine—-enter in mercy that place of renown. The bass addresses us—-if God so chooses these dwellings He must pour His benefice upon them—-He provides these words of blessing; and at this point the recitative merges seamlessly with the final chorus.

But first we need to consider the one aria of the cantata, that for alto, strings, two flutes and continuo. It is the antithesis of the torment, tension and anguish that form the basis of many eighteenth century Lutheran texts. Indeed, this very point reminds us that the only way to begin to understand something of Bach′s and his lyricist′s attitudes towards faith and dogma is to study the cantatas as a whole, a view that Schweitzer expressed over a century ago; any single one can only provide a limited view.

This cantata is about the joy of having God enter into our hearts. Compare it with the expressionist representation of mental torment and alienation in, say C 109 (volume 1, chapter 23) and one begins to grasp something of the range and scope of Bach′s artistic output. C 34 is about love, peace and contentment and the alto aria is its central bedrock.

Its gentle throbbing, lullaby-like rhythms immediately establish an atmosphere of complete peace and calm. First and second violins play the obbligato melody in tenths with the flutes doubling an octave above, an unusual and striking sound. As in the two recitatives, the initial throbbing, pulsating quaver bass line is a tonic pedal, again establishing a feeling of rooted assurance.

But the figuration changes as early as the third bar when a gently stretching first violin suggests the act of reaching up toward Divine rewards, shortly to be followed (bar 6) by a hint of the pouring down of God′s blessings.

The lines of the verse state simply—-Happy are those chosen by God to be His abode—-what greater glory could there be than to be the recipient of His innumerable blessings. Thus are all the principal images encapsulated within the fabric of the ritornello theme.

The middle section of this adapted ternary-form aria begins at bar 29 with the modified reprise returning at bar 45. Note that the ′countless blessings′ figuration now occurs more frequently, indeed, even the final ritornello statement has been rewritten to accommodate this gesture. It seems that our happiness is complete and our faith fully justified as God′s benefice continues to cascade over us ever more profusely.

As noted above, the bass recitative is connected to the closing chorus whereby God′s blessing is announced by the full ensemble—-Peace be upon Israel! Thus, the last two bars of the former also form the brief introduction of the latter. The chorus proper begins with the appropriately ascending scales (bars 3 and 4) and the text is a paean of praise—-Give thanks to God′s mighty hands and His care of us—-His great blessing casts peace upon Israel and, indeed, upon ourselves. The rising scales at the beginning are derived from the secular work′s mention of hastening to the holy steps.

The structure of the movement is quite idiosyncratic and relates better to the original than to the adapted text. Originally, the first stanza was easily divisible into two main parts, the first dealing with the image of hastening and the second tendering appeals to the Almighty to provide peace for us all. The new verse has no obvious point of division and, therefore, no clear justification for the resulting musical structure. In general terms, the mood of the music is appropriate in either circumstance; it is simply worth noting that originally Bach had taken care to represent not only the mood of the verse in musical terms, but also its configuration.

Thus we have a twelve-bar instrumental section which is repeated with the addition of the choir (from bar 15). Following this is a second and longer instrumental section (31 bars) which is also repeated with the choir. The vocal writing is fairly basic, unsurprising when we note that four additional lines have been added to an already rich instrumental texture. But the bold, homophonic choral sound is still appropriate for the expression of praise to the Almighty.

There is no concluding chorale and it may be that this is a legacy from the work′s secular heritage. Nevertheless, it is rather unusual to have no reference to a hymn tune of any kind in a religious cantata. Bach, presumably, was perfectly happy to leave the parishioners with the sound of this oddly shaped, but appropriately festive chorus echoing in their ears.