Truly, truly I say to you.

The fifty-fourth cantata of the cycle for Rogate (fifth Sunday after Easter).

Certain features of this work might indicate that it was written under pressures of time. The almost naive rhythmic simplicity of the instrumental parts in the first aria and the minimal notation for the violin in the second, allied to the fact that there is no chorus, all point in this direction.

On the other hand, it may be that Bach was simply experimenting with various textures. And counting the third movement as an aria, this work includes four of them! Would not he have been tempted to make more use of secco recitatives had he been composing against the clock? Furthermore, the chorale is a reharmonised version of that which had ended the early C 155 (chapter 37) presented in this cycle less than six months earlier (it would also be called upon again, several years later, for C 9 (vol 2, chapter 58). If time was a factor, why expend effort reshaping and transposing it?

As is so often the case, Bach presents us with a mass of contradictory evidence and a number of puzzles. Perhaps the safest course is to assume that, consummate practical professional that he was, he knew precisely what he wanted, did not cut corners and, whatever the effort required, produced precisely what he knew to be the right music for any given text, occasion and circumstance.

Bearing all this in mind, when we look at the opening bass aria, our first question must be: why are the instrumental parts so rhythmically bland and ostensibly uninteresting? At a quick glance the score looks more vocal than instrumental, there being nothing of an idiomatic nature that particularly suggests either string or oboe writing. Indeed, it has the superficial appearance of a student counterpoint exercise. The mood is serene and tranquil, the texture (mostly in four or five parts) is relatively unvaried and there is a complete absence of drama, surprise, spectacle or excitement.

And herein may well lie the clue. The text states, with quiet dignity—-verily, I say to you that whatever you request of the Father in My name, He will provide it. The bass voice is that of Jesus and it is unsurprising that He speaks of His Father with a calm sense of reverence and decorum. The richness of the text, the unobtrusive nature of the melodic ideas and the gently flowing rhythms combine to create an appropriate atmosphere of dignified restraint wherein the Lord deigns to address us. There are few arias in the canon presented in this curious manner.

The ritornello form of the piece is based around imitative entries of the serene, yet authoritative, opening theme.

It is announced by the second violins with doubling oboe d′amore and thence answered by the first violins (bar 4) and the continuo (bar 7). The bass enters with the same idea; in fact there is very little in the vocal melody that is not taken directly from the instrumental lines. But tight though the musical development is, it is not a strict fugal exposition. There is, however, very much a sense of being at one about the movement. Every part fits perfectly and modestly with the others without conflict or discord, a metaphor perhaps, of the ideal union of God and Jesus or even, potentially, of Man and God. The entries of the theme at the beginning, every three rather than every four bars, contribute to this feeling of perfect abutment.

There are two moments when the upper parts declaim a simple flowing of imitative quavers (from bars 40 and 68) encompassing the words—-He will give to you {that which you request}. Might we interpret these passages as a minimal and unforced musical representation of the blessings God may bestow upon us?

Christ has spoken and the commitment has been made. In the remainder of the cantata the other three voices confirm his pledge and the meaning it has for them.

Whilst the conventions of the time allowed for notational shortcuts in the writing of harmonies (e.g. figured bass) Bach does not often employ them in other contexts. This is because his music is so precise; every note has its proper place and the performers need to be acquainted with exact information. So it comes as a surprise to find nearly half of the violin obbligato line of the alto aria written in shorthand. The main theme is delivered in full detail in the first four bars, the fifth demonstrates the sorts of figuration that Bach had in mind and subsequent bars simply note the harmonies.

The violinist is expected to use the notated chords as the basis for a rapid demi-semi-quaver bustling, the function of which is to invest the movement with energy and momentum, thus leaving the majority of the melodic invention to the voice and continuo line. References to the principal melody from the opening four bars appear quite frequently, particularly at times when the alto draws breath.

The alto declares faith in the Divine promise—-I would pick roses even though the thorns prick me—-I know that my appeals go straight to the heart of God for He has promised me. These thoughts are dealt with successively in each of the da capo sections, the first a blissful, if rather energetic meander through the rose garden and the second, from bar 42, a forthright assertion of faith. The two most obvious moments of word painting are conveyed through long, and in the first example tortuous, melismas. That on stechen—-the pricking of the thorns—-(bars 27-9) is indeed graphic and that on Flehen—–an entreaty—–(bars 47-9) conveys the sense of a heartfelt plea.

It remains something of a mystery as to why Bach wrote such a ′zippy′ movement for this relatively restrained text. Perhaps it was partly a matter of balance, a necessary contrast to the gentle and compassionate bass aria. It may also be that the urgency of our entreaties, allied to an unshakable conviction in the Lord′s word, need to be conveyed in as lively and vigorous manner as possible.

One is left, however, wondering if the violinist’s realisation of the minimal text was up to Bach’s satisfaction, because he does not appear to have used the technique again.

The third movement is a chorale, but not one of those reflective or meditative four-part settings with which Bach′s cantatas are often wont to end. This is an energetic, lively presentation of a chorale melody which Bach was later to employ twice in the space of three weeks towards the end of the second cycle in Cs 108 and 74 (vol 2, chapters 44 and 48). The latter work presents the chorale in its least extrovert setting, simply harmonised in Am but with the vocal parts doubled by a full complement of wind and strings. C 108 is more assertive, transposed into Bm with a commanding quaver bass line, at times quite chromatic, underpinning the three upper parts. But neither setting approaches that of C 86 for sheer gusto and élan. Set at the lowest pitch, presumably to keep it in the comfortable middle register of the soprano voice, two oboes d′amore and a continuo bass line form an imitative trio encompassing the plainest of possible renditions of the melody.

Uninhibited by the dark minor key, the oboes immediately stretch upwards, assertively proclaiming the enduring reliability of the Lord′s word—-whatever He has promised and sworn, He will keep that vow and, through Jesus, help us to reach the host of angels. 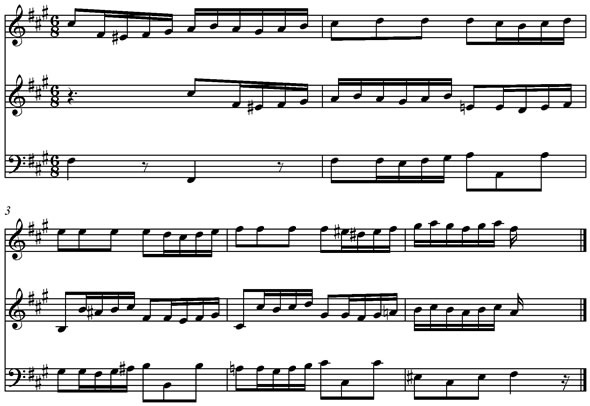 This is a declaration of strong, unyielding faith and we begin to understand that, in associating this image with the most rhythmic and unyielding of musical ideas, Bach has a very particular view of this text.

The single recitative for tenor is short and to the point. It is as if Bach wants to interrupt the flow of affirmation as little as possible. It presents a direct contrast between divine and earthly values—-God does not behave as the world does, making pledges without keeping them—-His promises will be fulfilled wherein we might encounter His delight. There is a moment of harsh severity in the melody at the mention of the world′s failings (bar 2) but the short, five-bar movement′s main function is to move us from the shadows of minor to the positivity of the major. In so doing it also delivers us to the key of the aria which follows immediately.

It is as attractive and ebullient a movement as the two arias which preceded it, although it must be said that the librettist has given Bach little to work with. Not only is the sentiment a virtual repetition of that which has already been stated with considerable zest and enthusiasm, but it is repetitive within itself and contains no images or figures of speech of the kind that a composer like Bach might seek out as sources of inspiration—-God′s help is certain and while it may be delayed, it will not be rescinded—-His word makes it clear that His help is true. What can a composer of imagination do with that? Bach responds with an attractive and positive movement but there is no drama, word painting or specific relationship with the text. This aria could act as a suitable setting for a dozen similar stanzas.

Bach does, however, take care to unite the musical and poetic rhythmic declarations. The opening five-note violin motive declaims the rhythm of the first vocal phrase—-God′s help is sure. The tenor takes this up and repeats it numerous times in the course of the movement.

Perhaps we should view it simply as a third and final validation of the efficacy of His Word. The alto, soprano and tenor have now each taken their turns to vigorously assert their faith and commitment. And we have been given an essentially positive and jovial cantata although it is not, dare one say, one of those that deeply stirs the soul. But it justifies the view that there is a place in the canon of ′well regulated′ church music for the pleasantly diverting alongside the intensely emotional.

The four voices combine, for the first time, to render the closing chorale. It is a sturdy, almost peasant-like melody simply harmonised and, no doubt, lustily sung. Its predictable two-bar phrases emphasise the undoubted but uncomplicated nature of its message—-Hope awaits the right time for that which He promises—-He knows what is best and uses no subterfuges—-therefore we should place our trust in Him.

We began with His promise and proceeded to hear the reactions of the faithful. We end with the reminder of the fact that it is He, not we,  who  decides when, and if, our wishes will be granted.

This is a work with several possibly understated musical delights. But it is scarcely illuminative of Bach′s development as a composer or his increasingly complex attitude towards Lutheran texts and their transformation into unique musical soundscapes.