Now, the hope and power.

Let us begin with a few of the unanswered questions about this piece:

1 Was it originally the first movement of a complete cantata or intended to stand alone?

2 If the former, how does it stand in relation to the main canon of cantatas none of which employed a two part chorus?

3 Could it be an arrangement by Bach, or someone else, of a chorus originally written for four parts only?

4 If so, might it have originally been part of the first Leipzig cycle?

5 Could it have been composed by someone other than Bach?

Taking the last question first, does anyone else spring to mind who could have conceived of a movement of this force and authority? The vaulting opening subject seems typically Bachian as is the dancing first countersubject (basses, from bar 8) making so much use of Schweitzer′s three-note ′joy′ figure. 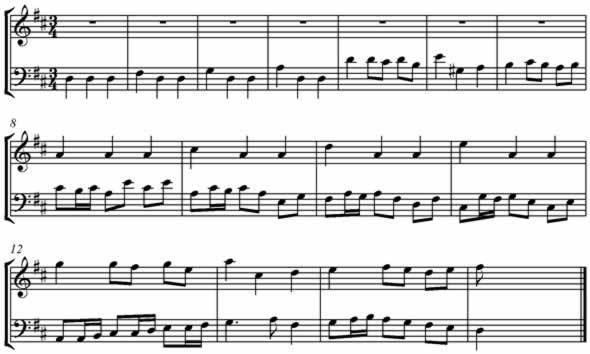 On the other hand, there are features not entirely typical of Bach; for example the division into two discrete parts (up to and following bar 68) and the splitting of the main subject between the two choirs (from bar 69).

But just as when the authorship of the Dm concerto for keyboard was questioned some years ago, one can only respond, who else at that time would have been capable of writing music of such power?

It is reasonably assumed, though by no means certain, that this would have been part of a cantata for St Michael′s Day. The text may be compared with those of the opening choruses of the other St Michael cantatas Cs 130, 19 and 149—-the power and might of the Lord and Christ is assured now that he who berated them has been defeated. It is usual for Satan not to be mentioned by name, or at least only sparingly, in this group of cantatas the focus being entirely upon St Michael′s and the Angels′ victory on behalf of the Lord.

Musically, this piece does have features in common with the other great choruses. The busy counterpoint suggests battles and massing armies and the textures and main themes build from the lowest to the highest registers, symbolically raising all eyes towards heaven. These characteristics are slightly less obvious in C 130 but there Bach was constrained by the restrictions of the chorale/fantasia format.

The principles of the permutation fugue (which we find Bach applying particularly in the earlier cantatas) may appear daunting but in essence they are very simple; an expansion of the texture from one theme to several. One voice, in this case the basses, announces the first theme (A) usually unaccompanied (from bar 1). It is here taken up by the tenors (bar 8) whilst the basses declaim a new counterpoint against them (B). Thence follow altos with A, tenors with B and basses (another new theme) C. Finally the sopranos take up the original theme A, altos with B, tenors C and basses D (which in this case is little more than one long note). Typically the four themes, A, B, C and D can occur in any combination. In this case Bach demonstrates his supreme contrapuntal virtuosity by inverting A and sounding it against the other countersubjects (from bar 29.)

The first working of these themes takes us to the midway cadence at bar 68 from which point Bach embarks upon a second exposition. Essentially the same material is reworked, except that this time the order of entries is from the highest to the lowest voice: soprano, alto, tenor and finally bass (from bar 76).

The most likely explanation is that this movement was composed by Bach as four-part chorus, probably for St Michael′s Day and arranged for double chorus for some later purpose or for a later celebration of that same day. We can only lament the probable loss of the remainder of a work that began so commandingly and with so much promise.

I shall confess His name.

The reaction of most listeners coming across this fine aria is likely to be one of regret for the almost certain loss of the rest of the work. Dated at 1742 (Dürr p 665) this must have been one of Bach′s last compositions in this genre. Even its liturgical function is not certain; Dürr (ibid p 665-6) suggests the Purification and quotes various works which were adapted from other sources for presentation on this day e.g. Cs 161, 157 and 158.

The text does, however, strike resonances with others of those written or adapted for this day—-I confess the Name of the Lord from whom all are blest—-death will not rob me of the certainty of His Light. For example a very similar sentiment, though differently expressed, may be found in the bass aria/recitative from C 157.

This aria for alto, two violins and continuo has a quality of mellow assurance often to be found in works from Bach′s last decade. It is built on the ritornello principle with the (by now) familiar adaptation of ternary form. There is an unmistakable A section ending in the cadence in the dominant key over bars 25-6 and a contrasting second section passing through related keys. But there is no proper reprise, merely a few musical echoes of the original ideas.

Long notes and melismas on certain key words aside, there is none of the obvious or graphic word painting with which many of the earlier works are festooned, suggesting the mature Bach at his most assured. Nevertheless, relatively recent scholarship indicates that the aria was originally composed by Stölzel and latterly adapted by Bach. Clearly Bach had recognised its musical qualities and decided to make use of them!

There is one final teasing observation to be made. The little upward skirl followed by falling notes, first heard at the end of the second bar, is highly reminiscent of the figure introduced by the flute in C 157/1.

If, indeed C 200 was intended for the Purification, might this have come about when Bach looked back over the scores of previous works written for this day?

Sinfonia only; text and title unknown.

This incomplete movement is listed amongst the cantatas because the autograph score registers the requirement of four voices (Dürr p 793). It has been suggested that its genesis was a lost violin concerto but this seems unlikely. The rather odd double stopping for the solo violin concertanto and the skimpy scoring of some of the solo sections would indicate a more radical arrangement, perhaps from a lute or solo keyboard movement. The transformation of the prelude of the E major partita for solo violin into the sinfonia for the secular cantata C 29 comes to mind as a possible companion piece.

The sinfonia is scored for the kinds of forces which Bach typically used for festive occasions, three trumpets with drums, oboes, solo violin, strings and continuo.