The sixty-second cantata of the cycle for Trinity Sunday.

N.B. For comments upon the background and context of this work, refer to the previous chapter.

C 165 is a slight work in comparison with both its sister cantatas C 194 and C 20 (vol 2, chapter 2). The latter followed a week later, ushering in the chorale/fantasia cycle. But many may judge C 125 to be a work superior to some of the other adaptations of earlier compositions that appear late in cycle 1; this is particularly true of the two recitatives. There is no chorus but that aside, the overall structure is a familiar one, alternating arias and recitatives leading to a concluding chorale. All four voices are employed as soloists, uniting in the final movement. The instrumental support is for strings and continuo only, with a single bassoon stipulated but having no independent role. It merely adds bite to the bass line when required.

The opening soprano aria is a perfect example of Bach′s ability to create a silk purse from a sow′s ear. The main melodic idea has only minor musical interest to offer and looks much like the invention of an average student; it has little of character to grip the imagination. The rising scale of four notes turns back on itself before becoming a stream of semiquavers. Introduced by the first violins it is thence taken up by each of the three lower strings in the form of a fugal exposition. A full contrapuntal texture is then followed by a fifth (redundant) statement of the theme again on the first violins. This leads to the cadence where the voice enters, still with the same theme. Each subject statement dissolves into a semi-quaver stream which may be designated a countersubject.

If this sounds overly complicated, look at the bar-by-bar diagram below, the main subject designated as A and the semi-quaver passages by s/qu. The soprano enters at bar 9.

The following shows the string entries omitting the semi-quaver countersubjects. 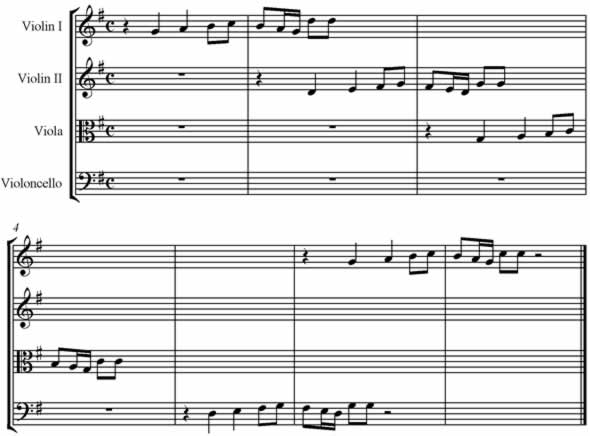 Thus Bach creates a texture of quite awesome complexity but it is still only the beginning. The aria′s three instrumental episodes (beginning bars 14, 26 and 42) are all additional fugato sections built from A, as is the final ritornello statement, an exact repetition of the first 8 bars.

Those with scores might like to amuse themselves by counting the number of times that A is used throughout the movement. You may well be surprised! But the significant point here is the way in which adept contrapuntal manipulation of a totally unprepossessing theme can create a texture of considerable emotional intensity. The paradox is that the more often this dreary idea is repeated, the more expressive it becomes.

The text relates to the act of baptism—-Oh that spring of spirit and water that admits us to the Kingdom of God—-Oh River whose miraculous power drowns all sin and bestows new life upon us. The constant semi-quaver movement presents us with a general picture of flowing water which extended melismas equate with the Book of Life. It might be thought that that in adapting this movement Bach achieved a greater degree of success in wedding words, images and music than in some other instances within this cycle.

A point worth noting is the darkly flattened note on Missetat—-sin or crime (bar 32.) This is the sort of detail which might well have been added when the new text (replacing that of the original Weimar performance) was in the process of being accommodated; in fact either a b flat or natural would fit the rest of the harmony perfectly well. This simply serves to demonstrate that, as with the general alterations that Bach frequently made to accommodate new texts in chorale reharmonisations, he noted even the most minimal of changes that would create a meaningful union between words and music.

In fact, the alliance of text and melody is so successful in the two recitatives that one is driven to the conclusion that they cannot be adaptations. The first is secco for bass and it pulls no punches—-Adam′s cursed legacy, flesh infected with sin, attracts God′s anger, death and destruction—-but the Christian is blessed, his spirit is cleansed and wears the pure robes of Christ′s blood. The imagery is rich and exotic and Bach matches it almost word for word: note the rhythmic dislocations for death and destruction (bars 4-5), the harmonic kick on ′poisoned′ (bar 9) and the complete change of mood at the mention of the blessed Christian (bar 11).

The final phrase, stressing the significance of the act of baptism, is emphasised by four consecutive quaver chords in the continuo, the only time in the entire movement that it departs from sustained notes. This text clearly allows for a setting of dramatic gesture of the type in which Bach excelled, the portrayal of opposite or strongly opposing emotions. Here anger and resentment at Man′s inheritance of suppurating sin is contrasted against the peace and joy of God-given salvation, achieved only through baptism.

The alto aria is extremely concise. Here there is no drama, simply a confirmation of Christ′s great gift, followed by a prayer that we may be able to endorse, receive and accept it—-out of His love and through baptism He has given me life, salvation and happiness—-help me to renew this bond throughout the span of my life. The mood is serious and reflective (minor mode) but also purposeful and quietly resolute. The main theme turns upon itself with an air of introspection and within its 26 bars there is no space nor, indeed, any need for contrasting sections. The words are set linearly and the material for both melodic lines is derived from the ritornello theme.

The character of the music is one of thoughtfulness rather than ecstasy although the melismas on Seligkeit—-happiness—-and freue—-joyful—-leave us in no doubt about the true Christian′s inner state of mind.

The fact that two consecutive movements have been accompanied only by the continuo may have been a determining factor in Bach′s decision to buttress the second bass recitative with full strings. Not only that, but they also play a more active role than is often the case. Here the initial mention of the ′bridegroom of the soul′ swearing fidelity to the Lamb of God produces little melodic skirls of affectionate interplay between violins and voice. The admission of breaking the baptismal covenant generates a more fervent outburst over moving chromatic chords (bars 7-10) leading to a tender plea for compassion—-In Your Grace, have mercy on me, Jesus.

The mood then changes again to one of almost aggressive passion—-forgive the sins, the serpent′s stings that corrupt my body and soul and help me to choose You, who was lifted to the Cross. Images of pain, the serpent, the poison of sin and the Cross are all dramatically traced in the melodic line amidst the clinging string chords (bars 12-21). But the movement ends calmly and in the major mode of the following aria—-[Jesus] who soothes all pain and revives me as my strength fails.

The penultimate bar encapsulates both images, the failing vigour of the vocalist matching the rising life force and supporting emphasis of the upper strings. Can there be any doubt that Bach composed this recitative for these words and no others?

The third and final aria is for tenor and continuo, first and second violins combining to provide an active obbligato line.

The verse does not fall easily into two sections which would have suggested a da capo structure. It develops a single line of thought culminating in a final plea—-Jesus, death to my own death, as I lie in my final agony, show that You are my own ‘serpent’, healing my poisonous sins—-Heal, Jesus, that I may find Life! The continuo is a succession of almost unbroken quavers, perhaps implying the inevitable passing of time and movement towards the grave.

It takes little imagination to feel Christ′s hovering spirit in the violin melody as it passes through, above and below the tenor line. The tenor is the voice of the Christian and one notes its quiet insistence upon certain key ideas: death′s death (from bar 12) my final agony (from bar 19) and the poison of my sin (from bar 26). The rhythmic energy and interactions of the three lines ensure an optimistic outcome; certainly death here is not thought of as a sad or tragic event. But there is enough musical emphasis upon these images to remind us of its significance in our earthly lives. We can eventually escape pain, sin torment and the agonies of death, but we still have to undergo them.

The closing chorale is quietly contemplative as its minimal forces would suggest; even with the added bassoon it requires fewer than a dozen players. It is less a prayer than a resolved statement of creed—-His Word, Supper and Baptism protect us against all misfortune—-the Holy Spirit teaches us to keep faith. The simplicity of the musical setting conveys as much of the message as the verse but, for the astute listener, Bach adds a couple of additional pointers. On the key words—-Glauben—-belief—-and vertrauen—-faith—-there is a little flurry of activity in the two inner parts, a subtle musical underlining of the cantata’s fundamental theme.

If this was the cantata which ended Bach′s first experimental cycle before he embarked upon some of his greatest works, it was fitting. No trumpets or drums and not even a chorus, simply a quiet, perfectly judged, expertly balanced musical depiction of the text.

And for those who may have craved more, the massive chorale/fantasias of the next few weeks were about to burst upon them.