A solo cantata for alto voice.

NB This is the fourth of a group of eight cantatas (150, 131, 143, 54, 132, 152, 161 and 158,) all known or believed to be early works. None of them were reused in the later great Leipzig cycles. The music is of variable quality, although there are some superb movements here waiting to be discovered and enjoyed. Above all, these cantatas are invaluable in helping to trace Bach’s development as a composer.

For the seventh Sunday after Trinity.

It is difficult to over-emphasise the originality of the opening of this cantata, the baroque convention being to begin a movement with a clear establishment of its key. In fact, this practice was maintained well into the latter part of the century, many masterpieces beginning with two or three soundings of the key chord (see, for example, the first movements of Beethoven′s Eroica and Mozart′s Jupiter symphonies).

Bach, on the other hand, begins this cantata with a dissonance, exacerbated by the throbbing rhythms, rising pitches and building of the texture. There is a tonic (doh) note of e flat in the continuo but immediately above it we hear an incomplete version of chord V7. One does not really get the impression that the key has been fully established until the cadence over bars 8-9.

The two viola lines, in themselves evidence of this being an early work, give a richness to the string texture which is, at times, reminiscent of the 6th Brandenburg Concerto. The overall effect is mildly disconcerting rather than dramatically invasive, a representation of the insidious poisoning of the soul from pervading sin.

And yet despite the originality of the conception, Bach adheres to a conventional structure, that of the strict da capo aria.

Bach had clearly experimented with the solo cantata as a young man although it seems not to have been particularly popular in his early Leipzig years. He did resurrect C 199 for soprano as the 13th work of the first cycle (chapter 14) but there are none in the second and most of the solo works come later, either recalled from the Weimar years or newly composed. There are four for alto (Cs 54, 35, 170 and 169) and further contextual comments may be found in the essays in volume 3, chapters 23, 19 and 28.

Returning to C 54, the theme of the work is that of sin, its invasive nature, the necessity to resist it and its ultimate vulnerability. The structure is unusual, two arias separated by a recitative and no reference to any chorales. Very probably the first solo cantata composed by Bach, it stands out as a superb example of how a new idea or genre stimulated from him the most imaginative and innovative of creative responses.

The carefully crafted ritornello theme is heard fully four times, the da capo reprise giving the listener ample opportunity to become familiar with its distinctive shapings. It is principally characterised by a gradual increase of tension brought about by the rising pitches, enriching the textures and the flow of dissonances. It snubs its nose completely at established Baroque practice by beginning on the discord described above.

It rises, then falls to the point of the vocal entry, a symbol of encroaching sin which, if properly resisted, will eventually be dispelled and dispersed. Key words are both highlighted and set in opposition to each other. Allusion to sin′s poison is created through melismas which suggest its invidious incursions of the soul, and the injunction to stand firm against it through long, sustained notes. Such is the subtlety of Bach′s interpretation of text; his manipulation of pitches, textures and rhythms all combine to create images within the listener′s mind, albeit almost unconsciously. Snake-like movement suggests serpentine biblical sin whilst settled sustained notes create the impression of resistance and/or defiance.

But perhaps the most interesting musical element that Bach bends to the service of the text in this movement is the harmony. Mention has been made of dissonances, mostly achieved through conventional suspensions, but it is in the contrasting B section where the chordal progressions are at their most arresting. The text states—-do not let Satan deceive you—-you will be struck down by a deadly curse if you profane God′s honour. The vocal line becomes immediately more assertive and the allusion to the ′deadly curse′ is almost spat out with the most unexpected of interrupted cadences (bar 45).

Bach uses this progression less than half a dozen times in the cantatas (although it will be found in the first movement of the double keyboard concerto in Cm) and, as always, when a composer uses a particular device only occasionally, it is generally invested with great meaning and intense emotion. And, in the unlikely event the point may be missed the first time, Bach does it again, this time using a slightly different cadence in bar 51! There is, seemingly, no end to the fecundity of his invention when textual points need to be emphasised.

Finally, one should notice the disjunctive nature of the da capo return. Bach ends the B section in Gm, a related key to the tonic of Eb. But he raises the third of the final chord so that it becomes G major. The recapitulation of the beginning of the movement, itself harmonically ambiguous, is juddering and unexpected, a brief musical metaphor of the impact of sin and the struggle to resist it.

The recitative is secco and, in that it glides effortlessly into a concluding arioso, typical of Bach′s early cantatas. The moral propounded is simple—-sin, when only its surface is seen, appears golden and attractive—-but examine it more closely and it becomes an empty facade, like Sodom′s apples (with the obvious double association of poison and sin). The verse ends with a dire warning—-those wedded to sin will never dwell in God′s kingdom, for it pierces the body and soul like the point of a sword!

The character of the melodic line moves with great delicacy between the apparent confidence of sin′s alluring appearance to the reality of its essential emptiness; note, for example, the softer and sadder quality it assumes from bar 9. The voice drops to a low f where its natural darkness, underpinned by the seemingly unconnected notes of e and g flat in the continuo, express the sense of disappointment, but crucial reality, that this revelation brings us.

In the last bars, the continuo line erupts into active semi-quavers depicting the image of the piercing sword. It also prepares us for the insistent bass that drives us forward from the opening bars of the final movement.

The verse of the second aria has nothing new to say, being a reinforcement of what has gone before—-those who sin become part of Satan, its creator—-but if one resists its chains, it takes immediate flight! It is interesting to note that the texts Bach was given to set over the years were not always consistent. Sometime we are given the impression that the opposition and rejection of sin is one of the greatest challenges a Christian has to face, On the other hand, now it seems to be a fairly simple matter; reject it and it simply goes away. Perhaps the underlying premise is one often used by teachers and parents: encourage your charges and do not make the task seem too difficult lest they give up the battle.

But if the text is a trifle ambivalent, Bach′s music is uncompromising. The violins now combine to make one line and the violas another so that what had been potentially a rich six-part tapestry in the first movement now, with voice and continuo becomes a leaner and more aggressive three and four-part texture. The ritornello theme consists of a fugal exposition in the order viola, violin and (slightly adapted) continuo, generally underpinned by an insistent quaver bass. The countersubject is a stream of semiquavers which dominates much of the movement. 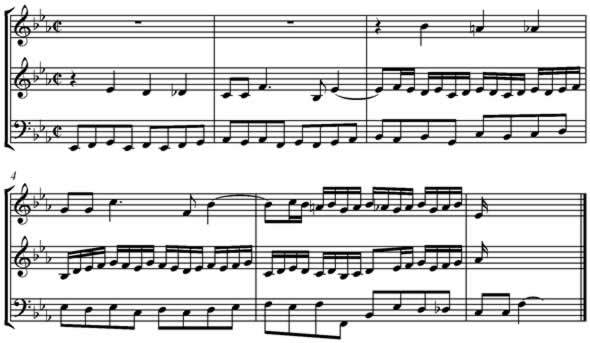 The alto enters with the same theme, setting in motion a second fugato in the order alto, viola, violin, alto, continuo.

The contrasting characters of the three thematic elements of the nine-bar ritornello are worth noting. The fugue subject begins with marked falling crotchets, possibly an assertion of strength and will. The bass quavers are similarly insistent and ongoing as, indeed, is the unending battle with Satan. The streams of semiquavers may be interpreted as torrents of sin, initially attractive but ultimately without substance and put to flight. The listener may or may not take such inferences from the music and, as has so often been said in these pages, no-one can always be completely certain of Bach′s intentions. We do not know to what extent eighteenth century congregations listened with ′metaphoric ears,′ perhaps detecting meanings and implications that our twenty-first century, less flexible imaginations may fail to appreciate.

A middle section begins from bar 38 but for the most part the musical material is the same. At the mention of sin retreating and ′taking flight′ there are four little bursts on the upper strings illustrating the action (bars 47-8), previously having been introduced in bar 32. The initial section is reprised, again fugally, with the entry of the voice and the established fugue theme (from bar 53) although this time the continuo is not tempted to join in.

The movement ends with no less gusto than that with which it began. Bach does not reprise the full ritornello theme, however, perhaps because the fugue subject has already appeared a couple of dozen times in less than seventy bars. He contents himself with one final high and triumphant statement in the continuo line before, like vanquished sin, it dissipates and disappears.

It is very probable that Bach never heard this work sung by a woman or a counter tenor. The latter was associated more with opera than with the church in eighteenth century Germany, and woman were not permitted to take part in the services. Bach would have used a teenage chorister with an unbroken voice and it is a tribute to the training and musicianship of these boys that he thought them capable of interpreting works as mature and demanding as this.

In the twenty-first century both male and female altos perform these cantatas and the assiduous listener will find many excellent recordings to enjoy and compare. Those of the veteran innovator Alfred Deller, who almost single handedly revived  the counter tenor repertoire and technique, should not be missed.