Peace be unto you.

NB This is the eighth of a group of eight cantatas (150, 131, 143, 54, 132, 152, 161 and 158,) all known or believed to be early works. None of them were reused in the later great Leipzig cycles. The music is of variable quality, although there are some superb movements here waiting to be discovered and enjoyed. Above all, these cantatas are invaluable in helping to trace Bach’s development as a composer.

This is another of those problematic works which is almost certainly incomplete and about which little is known. Dürr (p 289), quoting Spitta, suggests that the second and third movements may have originally been part of a cantata for the Purification and that the outer movements were added subsequently when it was performed for Easter celebrations. Whether other movements have been lost or removed is unknown. It has been suggested  that some sections of it originated in Weimar, but on the other hand, it may have been partially composed around 1726-7. Consequently, it may not be best placed here amongst the early cantatas, yet the hypothesis that sections of it were composed at an early stage (with other movements added later) is as good as any. Certainly the bass aria would appear to be an example of the mature composer’s work but some stylistic features of other movements suggest an earlier genesis. It is quite possible that it was originally composed as a funeral ode.

The various purposes to which these two arias and recitatives may have been put mean that there is little point in making contextual comparisons with other cantatas for Easter Tuesday. In any case the history and, indeed, the very authenticity of C 145, is doubtful and C 134, from the first cycle, was itself a parody of a secular cantata, much altered for subsequent performances (ibid p 289-290).

Thus it seems that there is no complete extant cantata which is known to have been definitively composed for this day. Nevertheless, we should be grateful for whatever has survived if only, as in the case of C 158, for the superb bass aria.

Like three of the later cantatas from the second cycle, C 158 begins with a recitative. Unfortunately nothing can be inferred from this as it may well have originally been preceded by an aria or chorus; or, indeed both. It is a simple hybrid movement of the type that Bach was often want to use in early works, a combination of arioso and recitative. However, its peaceful confidence and persuasive tranquillity both sit happily with Bach′s later styles.

The simple crux of this movement is the phrase of benediction Der Friede sei mit dir—-Peace be with you. It occurs three times in the text, at the beginning, middle and end. The phrase is articulated in this context so as to reassure the Christian—-it is the case that our debt of sin must be judged, but the Lamb′s Blood will, nevertheless, overcome the one who seeks to trap the Soul [i.e. Satan]—-you need not be distressed.

Bach begins with the reassuring arioso phrase—-Peace be with you—- underpinned by rising, quietly confident quavers in the continuo.

This plain statement is heard again in bars 7 and 8, after which allusions to the snares of Satan take us through the darker key of F#m. The movement concludes with six bars of arioso built around two extended statements of the original phrase. It also ends, as it began, in the soothing major mode.

The contrast between the opening two bars (peace be with you) and those which follow (uneasy conscience) is stark and reminiscent of Bach’s early cantata writing where every image is reflected in the musical setting albeit, on occasions, to the detriment of the overall structure.

The aria is without doubt an example of the mature Bach at the top of his form; Dürr calls it ′a master-work of Bach′s art′ (p 290). Scored for bass, continuo and violin obbligato it also includes an interpolation of a complete chorale, sung by the soprano doubled by the oboe, although not that which ends the cantata. The chorale is completely unadorned and because the soprano′s contribution, whilst significant, is a relatively negligible part of the overall musical fabric, this movement should not be thought of as a true duet; the bass voice and the encompassing violin dominate throughout. Dürr (ibid p 290) makes the plausible supposition that the chorale melody may have originally been scored just for an instrument, almost certainly the oboe, with text added a later stage. There is precedence for Bach taking similar action in C 161/1, significantly, also an early work composed at Weimar: see chapter 69.

Consequently, and despite the soprano′s brief entrance, this work is best viewed as one of the solo cantatas of which Bach produced a number for all voices throughout his career, though not in the second Leipzig cycle.

There is very little distinction between the text of the chorale and that for bass. Both begin with an adieu to the world of which we have become weary. The chorale then contrasts the peace and salvation of eternity with the combat and hostility on earth, the former obviously seen to be superior. The bass expresses similar sentiments with perhaps a little more emphasis upon the personal—-I will savour that place of dwelling, shining with the light of that Heavenly Crown.

The beautiful and complex ritornello theme reflects each of these ideas in turn. It begins with a melody of calm, mature acceptance tinged, perhaps, with the lightest sense of nostalgia associated with departure or separation. The earthly battles are alluded to in a passing moment of chromaticism (bars 7-9) following which the rapid violin skirls allow us to bask in the Light of the Crown. The ascendance to heaven is clearly audible in the climbing violin counterpoint set against the bass′s first entry, a theme developed from a figure initially introduced in the ritornello (bars 8-9).

Opening theme followed by the chromatic bar 7 and the rising violin figure heard against the bass entry. 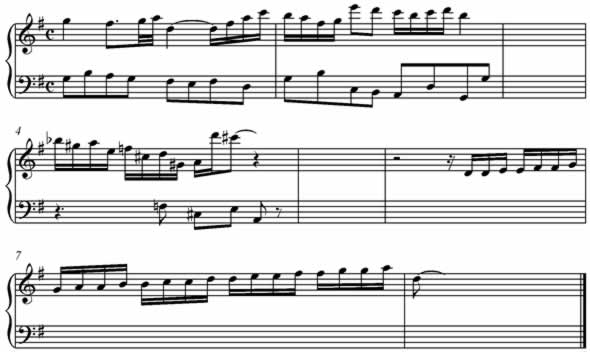 The twelve-bar ritornello gives us a textbook illustration of Bach′s compositional methods. He takes from the text images that strike him as being most significant and then invents motives which musically depict them. He may begin to expand them in a limited way before the voice enters (e.g. the radiance of the Crown) or he may simply place them in our consciousness, preparatory to later development. A simplified version of the opening violin melody here becomes the bass′s introductory statement and the principal motives (particularly those suggesting the ascent to heaven and the glow of the Crown) are extended as counterpoints against the voice at appropriate moments.

The result is a highly original movement of boundless imagination, text and music firmly united. The poetic message is clearly conveyed both explicitly via the words and emotively through the intangible suggestions of musical symbolism and feeling.

Structurally, Bach is constrained by the tonality of the chorale but he still manages to weld the aria into a familiar ritornello/da capo shape. The violin solo opens and completes the movement as well as providing short interludes. There is a clearly discernible A section followed by a B section (from bar 49) taking us, as expected, into contrasting minor keys. The A section is not properly reprised but developed anew, a frequent practice of Bach′s, particularly in later cantatas.

All the internal evidence thus points to this being a composition from Bach’s most mature period of cantata writing, whatever the genesis of the work as a whole may be.

The keys for these four movements were carefully balanced even though they may not have been conceived together as a cognate group. The first two are major, principally D and G. The second two are minor, making particular use of the key of the crucifixion, Em. This third movement is another hybrid, the first eight bars a simple secco recitative and the succeeding ten an affectionate arioso.

The initial lines of text form a simple prayer—-Lord, command my thinking and allow me, like Simeon, to come to You. The arioso simply luxuriates through the contemplation of dwelling in that place adorned with the Crown of Heaven. It will be noted that the text set as the arioso is identical to that of the last two lines sung by the bass in the preceding aria. However, there the musical emphasis was upon the delight of residing within the light and resplendence of the heavenly Crown. In the arioso our eyes are fixated more upon the vision of the Crown itself. The fact that the securing of this ′Crown′ is the ultimate realisation of our principal earthly ambition is marked musically by the two melismas on ′Kronen′ and the use of the highest notes of the singer′s range in bar 15.

The closing chorale confirms the work as an Easter cantata but whether it formed part of the original conception is anyone’s guess. Most readers will be familiar with a version of it used in every movement of C 4, an early work frequently resurrected by Bach, most notably to terminate his sequence of chorale/fantasia cantatas in the second cycle (vol 2, chapter 42). The verse of the C 158 chorale is set in the sixth movement of C 4 as an aria for bass.

A four-part version ends both cantatas but the harmonisations are quite different. It is possible that the mention of the ‘murderer’ in the penultimate phrase of C 158 wrought from Bach an additional moment of drama in the harmony, despite the fact that we are reassured that he cannot harm us.

The chorale pays tribute to the true Easter Lamb who has ensured that nothing, not even the assassin, can injure us. The language is stark and explicit—-the Blood of the Lamb—-high on the Cross—-its ′burning love′ marking the way to our salvation. There is something particularly suitable about this chorale for the expression of such sentiments; note the carefully shaped and crafted melodic rising and falling and the effort of stretching upwards in bar 11.

Finally, and perhaps most significantly, Bach did not transpose this chorale as he was often want to do. He retained the original key of Em which he had originally employed for every movement of C 4. There can be little doubt that he continued to associate this key strongly with the crucifixion.