Whist many aspects of this cantata remain unclear, there can be no doubt of its being a youthful work, the earliest existing of Bach’s wedding cantatas. And that presupposes that it was indeed composed for a wedding. Spitta certainly thought so and most critics have subsequently followed this line. But there is nothing in the minimal text (barely six lines for the entire work) which marks it definitively for such an occasion; it would be appropriate for any event which included the celebration of the importance and blessings of the Lord and our gratitude on receiving them. The only line which may have resonances of marriage and propagation is that of the duet—-may the Lord bless you, and your children, increasingly.


Dürr (p 779) suggests that the work might have been composed between Bach’s periods of tenure at Mühlhausen and Weimar although a number of musical characteristics indicate that it could have been even before that; it is quite possibly Bach’s earliest surviving cantata. The movements are short and relatively undeveloped, as is the text. There is no recitative and no chorale. Like Cs 150, 152 and 4, all early works, it begins with a short instrumental sinfonia for strings.


The sinfonias which herald these three religious cantatas are, however, all in minor modes whilst that for C 196 is in the major, an indication (and it can be no more than that) that it may well have been conceived for a happy event: all of Bach’s surviving cantatas for weddings begin with, and make predominate use of, major modes. It is written for a minimal number of performers, four singers, strings and continuo (no wind) and the complete work takes only about ten minutes to perform.


Additionally, the continuo makes much use of stock baroque bass lines, lacking the energetic and original shapings that were to become a feature of so much of Bach’s later music. And finally, Bach’s clear vision of the tonal principles guiding the structure and unified construction of his later massive movements is here, rather embryonic. The last movement clearly begins in F major and ends in C, the main key of the cantata, and modulations throughout are few and close to home, demonstrating little of the sophisticated, organic use of key relationships that were to be exploited in the later, extended arias and choruses.


But whatever the date or original function of this work may have been, it retains a certain charm and demonstrates Bach’s innate sense of expressive melody.


The sinfonia moves from a French Overture-like dotted rhythm to a series of triplets (bars 10 and 11) which, combined with a brief sojourn into minor keys, suggests a short, contrasting middle section. Although only twenty-four bars long, it is perfectly balanced and prepares us for a number of characteristics to be found in subsequent movements e.g. the triplets in the soprano aria and the imitative rising voices at the beginning of the second and fourth movements. It follows that Bach, even at this early stage, was thinking across the movements and beginning to conceive such compositions as unified entities rather than suite-like potpourris.


But despite the structural reservations we may have about the last movement, there are none about the sinfonia; it is a perfectly balanced little gem. Within its two dozen bars it has a clear opening theme followed by a contrasting middle section (from bar 10) which introduces the triplets and passes through the related minor keys of A and E. There is an embryonic reprise of the initial theme from bar 17. Note such little touches as the inversion of the opening two-part violin idea over bars 13-14.


The first chorus is longer but, at forty-two bars, not by much. Bach is already scrutinizing his texts in order to ascertain how they might be shuffled around to serve the purpose of musical and artistic unity. Thus he takes the first line—-the Lord has been mindful of us—-as the basis of the introductory and closing sections (bars1-11 and 39-42). The remainder of the text is dealt with in a double fugal exposition in the intervening bars—-He will bless us along with the houses of Israel and Aaron.


The fugue subject is the most minimal possible, built around four descending notes c, b, a and g.


The text provided the young Bach with no obvious stimulating imagery, and so the music is designed to carry a powerful rhetorical statement of the cantata’s premise, combined with lines of rolling semi-quavers which, presumably, are intended to suggest the pouring forth of divine blessing.


One final technical point which may, along with a number of other stylistic attributes, indicate that this is an extremely early work. The fugal entries are based around alternating tonic and subdominant notes. Bach’s almost invariable practice in the later fugues was to build them around tonic and dominant, especially in major keys. The sheer lack of tonal variety (although more apparent in the sinfonia) is another indication.


The soprano aria is possibly the most immediately attractive movement for most listeners. Violins combine to deliver the obbligato theme and the melodic lines throughout are strong and compelling. The opening three-bar ritornello theme transforms semi-quavers into triplets, as in the sinfonia.


The text is as anodyne and as lacking in inspiration as that of the previous chorus—-those who fear the Lord shall be blest, be they great or small.


There is a sense of growth, expansion or escalation in the imitative opening motives of the violins taken, incidentally, from the sinfonia and dominating this movement throughout. In fact, the rising harmonic sequences of the opening string and vocal phrases do suggest a process of ‘growth’ or increase. 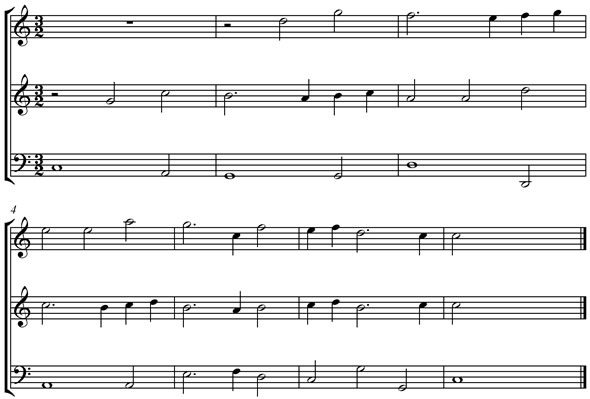 
Nevertheless, the main musical image is of two factions or textural groups which can exist individually or in partnership. The voices and continuo combine to form the first of these entities and the string group the second; two sets of musical forces playing off against each other. Indeed, they are seldom heard together and, tempting as it is to seek out an image encapsulated within this particular texture, it may well be that Bach has written thus for musical variety rather than for textual elucidation. Possibly Bach intended it as a symbol of the uniting couple; or, perhaps, of the relationship between God and Man.


Note also that the final musical symbol is one not of expansion but rather of contraction and conclusion. The strings descend over a full four octaves against the final statement—-God blesses you—-in the last three bars. It is a charming touch which Bach may have intended as a musical punctuation mark, emphasizing the certainty of the sentiment expressed.


The cantata ends, not with a chorale but with a second chorus. It is major mode and awash with rippling scale and arpeggio figures, particularly in the upper strings. As in the previous movement, the text addresses itself directly to the happy couple—-you are blessed of the Lord who created heaven and earth; amen. In the second and third movements the text had spoken of what the Lord does for us, a general statement relating to Mankind; the latter texts are more personal, addressed directly to the bridal couple. It is worth drawing attention to the fact that this is a technique which Bach uses elsewhere in the wedding cantatas, notably in C 195 where the lyricist and the composer shift the focus from the general to the particular within the individual stanzas (chapter 74).


Bach dispenses with the line of text very quickly in the first seventeen bars. A neat touch may be observed in bars 9-11 where the words ‘Heaven’ and ‘Earth’ are set in block vocal chords, the former at higher pitches than the latter.


Slight though this work may be, it is of some significance when placed in the context of Bach’s development as a composer, in particular his use of musical structures and his attitude towards the text. But it has a freshness, albeit, perhaps born out of inexperience or even naivety, which has its attractions and ensures that it is rewarding to listen to even today. As with so many of Bach’s neglected works, it remains worthy of inclusion within the repertoire.